Defensive Driver and Road Rager is an endless, tag-team highway racing game where two drivers test how far they can speed down an endless highway without totaling their cars or running out of time. Each driver has their own special ability they can use to make navigating through heavy traffic easier and more exciting while providing a health boost in the process.

The game starts out with Defensive Driver in the front. This driver prefers to avoid traffic as much as possible. Their car is initially given a handling boost to make switching lanes and avoiding much easier. Their ability, Defensive Driving, slows down time and gives the car an even greater handling boost. While this ability is active, every near miss with traffic cars gives the driver a health boost.

The game starts out with Road Rager in the back, but you can switch to this driver at any time by pressing [shift]. This driver prefers to smash through traffic and get everyone out of the way as soon as possible. Their car is initially given a health boost to survive a little longer in heavy traffic. Their ability, Road Rage, makes the car briefly indestructible and unstoppable. While this ability is active, every car you hit gives the driver a health boost.

So far, your final score is determined by the following  factors

Use or Cancel Special Ability - [Space]

Look Back - [Arrow Key Down]

Restart Game - [R] (only works when Game Over screen is displayed)

If you have any questions, feedback, or suggestions, feel free to let me know in the comments! Thanks for playing!

- Game can now be paused by pressing P.

- Smoothen how time slows down and speeds back up when activating and deactivating Defensive Driving.

- Switching drivers will now move the camera to the following driver instead of just having both drivers instantly switch places. When switching, the driver in front will now slow down, let you pass, and then follow you.

- Speed boosts have been slightly adjusted.

- Cones can now be knocked over when hit.

- Added slight curves to the road and elevation changes

- Updated house models and added mailboxes that can be collided with. House and mailbox models are made by Ilayda Hanci (https://ilaydahanci.myportfolio.com/). She will also help in making more 3D models for the environment (i.e. trees, windmills, etc.)

- Added more background props such as farms, trees, and windmills

- Slightly reduced the chance of curves and hills appearing

- Minor changes to traffic spawn. At the beginning there will be no traffic until you hit the first checkpoint, then the traffic spawn rate slows increases after each checkpoint hit. 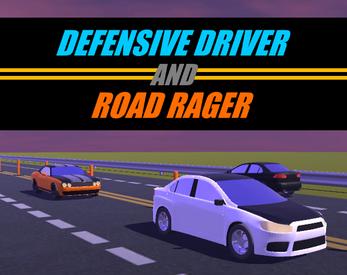